I've actually planned this for quite a while. I knew I'm going to Singapore for J's birthday, but I didn't want to celebrate it in SG again as we did it last year. I want to do something different, but I wasn't sure if J could apply for his leave, as it was the time when COVID-19 broke out in SG. When he confirmed that his leave was approved, I booked everything immediately (but with J's SG credit card heheh and paid him back afterwards :p)

J picked me up from airport and I remembered it wasn't a pleasant night, because of Covid-19 and my expectations of him keeping us safe as he'd promised. Also, I felt like my feelings and anxiety weren't acknowledged. I suppose SG was prepared, so J wasn't worried, but I was. Brunei didn't have a case back then and I was terrified that I'll be the first person to bring the virus back. I felt like my feelings were just being brushed off despite I've repeatedly voiced out my concerns and fears, hence it really upsets me & I broke down.

I guess we didn't really communicate well. Reflecting back, we both should have talked everything out. By that, I meant constructive deep conversation, and not just superficially..
A good conversation includes respecting each others' decision, and know that it's ok to feel the emotions. Conflicts / disputes aren't a bad thing; it's supposed to allow two parties understand each other better & put ourselves in their shoes. I guess, both of us failed in that sense.

On a brighter & happier note, we had lunch at The Coconut Club the next day. There's a long queue, but it was worth it. 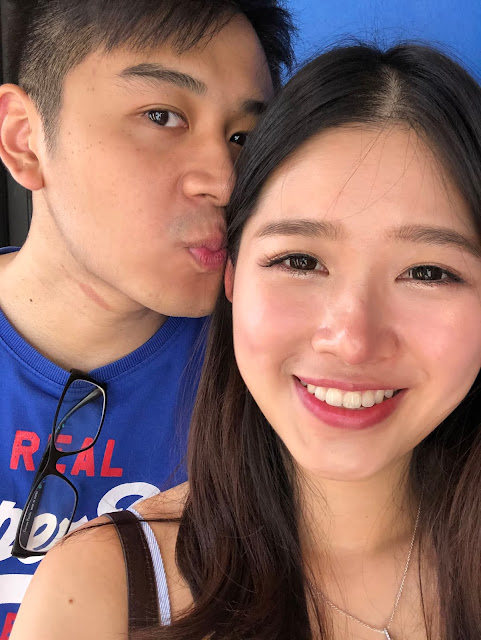 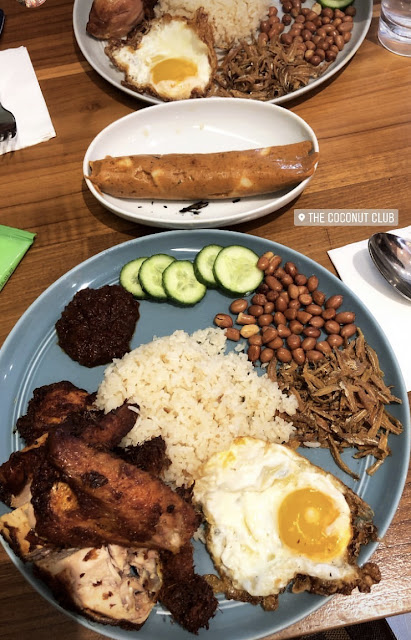 Not the best nasi lemak I've had, but it was good, and the portion was generous. A plate was good for 2 people to share! We also ordered the chendol red bean for dessert :) 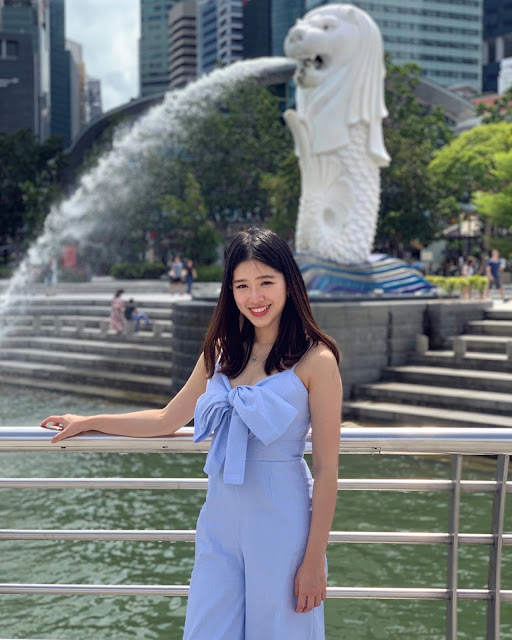 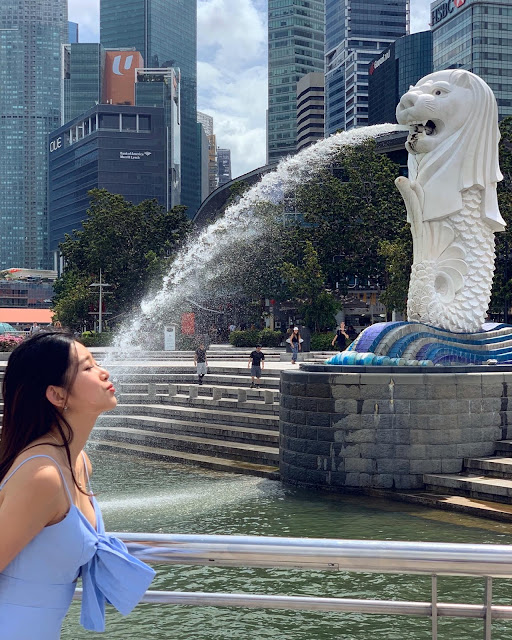 Celebrated J's advanced birthday with our Singaporean friends at Pepperoni Pizzeria. It was a rather funny experience, because we actually went to another branch at some secluded area. J was super confident that it was that branch as everyone has a car, but we should have confirmed before we departed! Ended up we were late for 30 minutes for the dinner, and I felt bad because I knew that they were gonna surprise him for his birthday xD 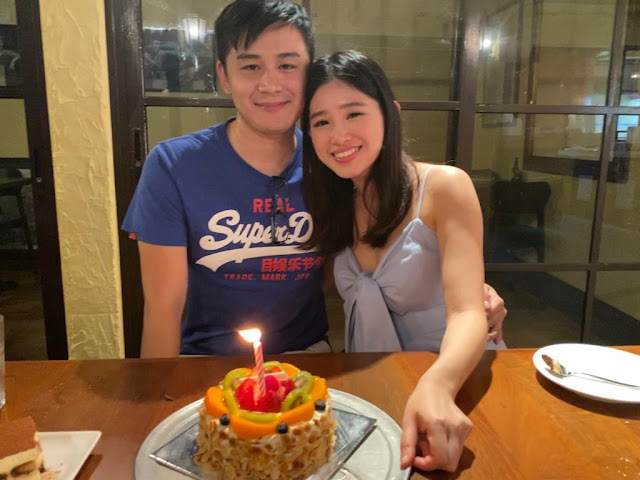 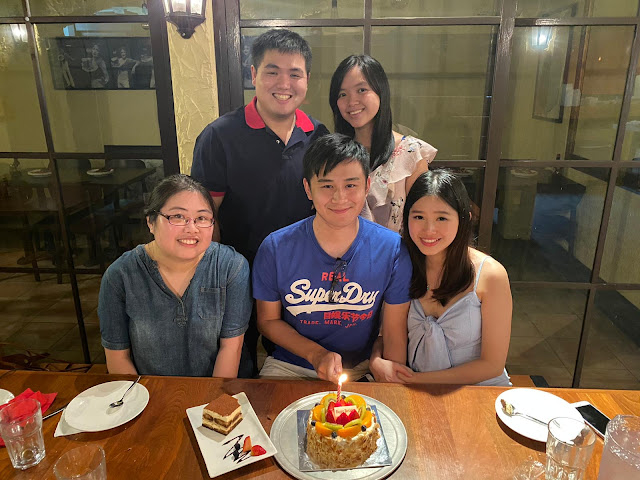 Thanks friends, and stay safe!

On the 8th Feb, we went to Batam for J's birthday getaway~
I've booked everything through a travel agent - WeekendGoWhere. I've actually researched and reviewed a few packages, and felt like that's the best offer. I regretted choosing the tour though, because initially I wanted to have a feel of Batam as it was our first visit here, and with a tour, I felt that we could experience the must-go places etc. However, the tour unfortunately was one of those tours that bring you to places & hoping you'll purchase the products so they'll get commissions in return. We visited the latex bed, Luwak coffee (which was interesting for J), Indonesia snacks store (which we incessantly munched on their free samples hehe)...the tour also included seafood lunch which we opted for an upgrade to have all the seafood fresh.

Our ferry was BatamFast. It took approximately 45-50 minutes to reach Batam from Singapore. The ticket costed SGD $49 two way, but mine was inclusive in the tour package. You also have to pay for a compulsory ferry tax of $29 per pax. Our trip departed at 8am, so we had to be there around 7am. Initially, we wanted to use Grab, but the taxi never arrived..so we ended up troubling J's mother. Sorry auntie, and thank you so much!! ♥ 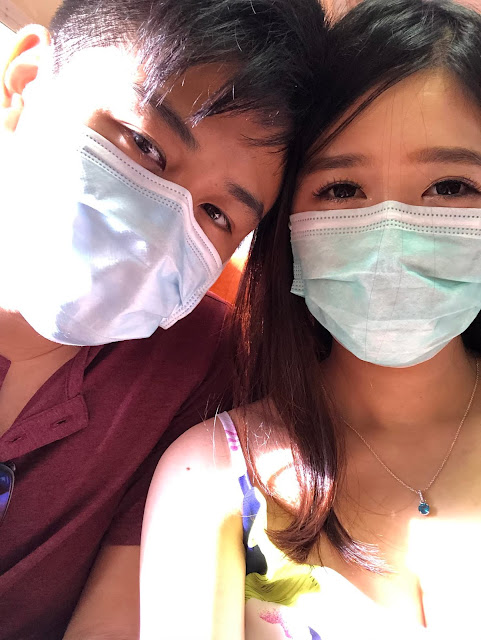 
I've booked a different accommodation from the original tour as I wanted some privacy for our trip. The hotel we stayed in was Woda Villa & Spa~ Unfortunately, the private pool villa was full and we had to share with 3 other people. The kids were so noisy, and J couldn't really sleep well at night T__T 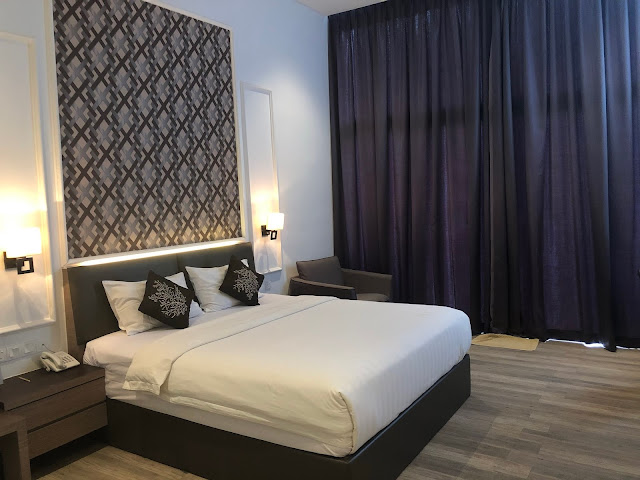 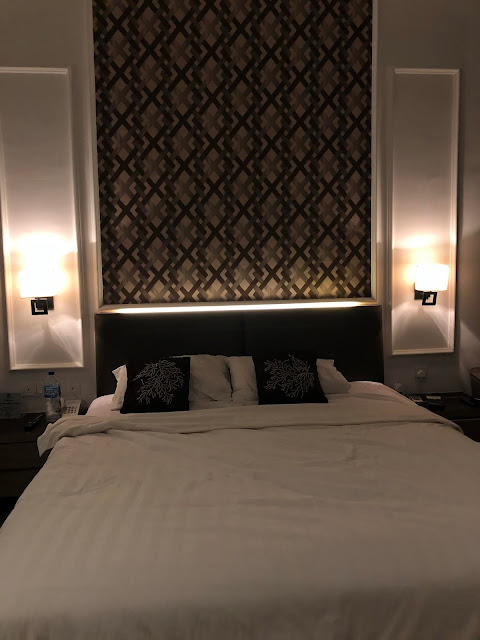 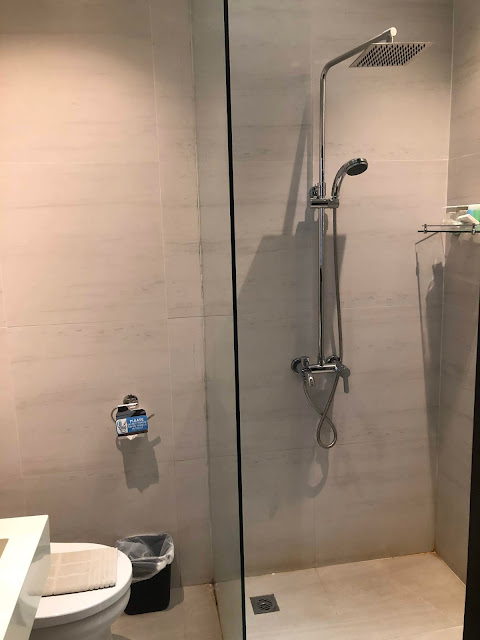 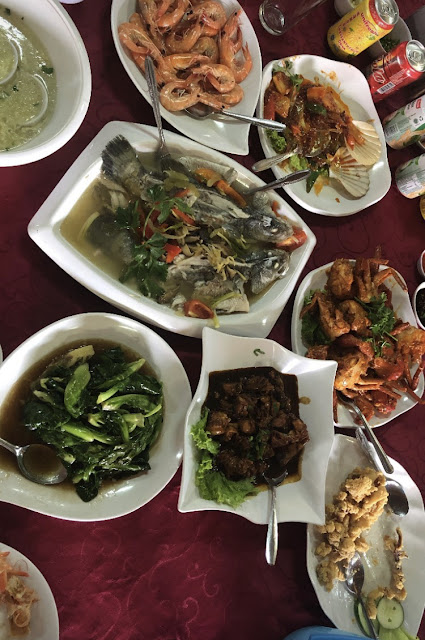 For J's dinner, I've actually did extensive research on hotels that would decorate the venue for me. I've called & texted them to discuss re: decorations & menu. It was quite difficult as I was not in Batam so everything has to be done electronically. Some hotels did not even reply me!!
Would definitely recommend Biz Hotel (Contact no: +62 812-6829-6721). They delivered what they've promised me :) 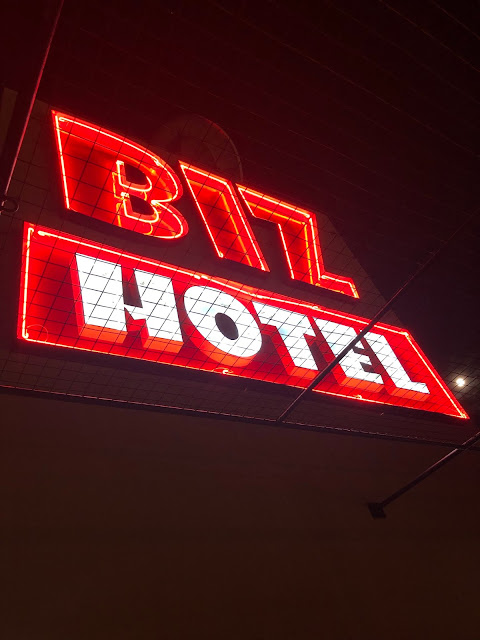 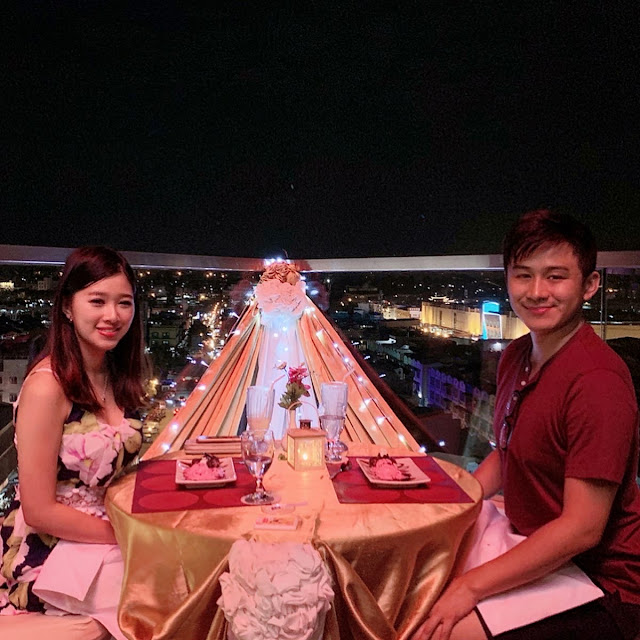 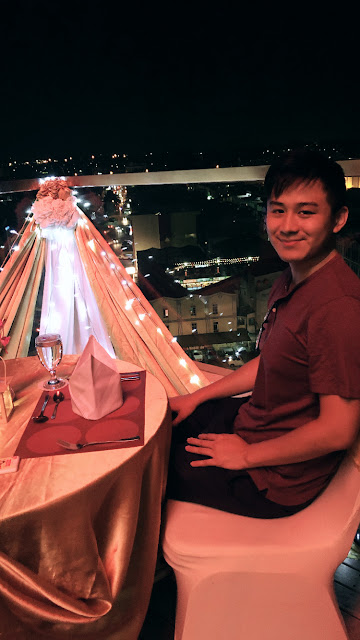 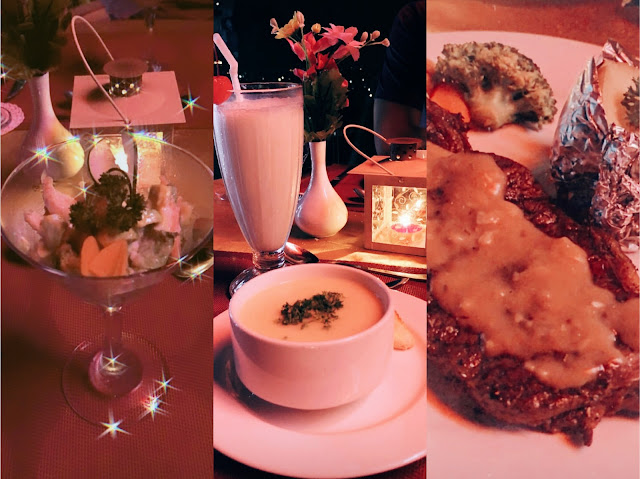 On the 9th, J's actual birthday, we had breakfast at Golden Hotel (opposite of Woda). 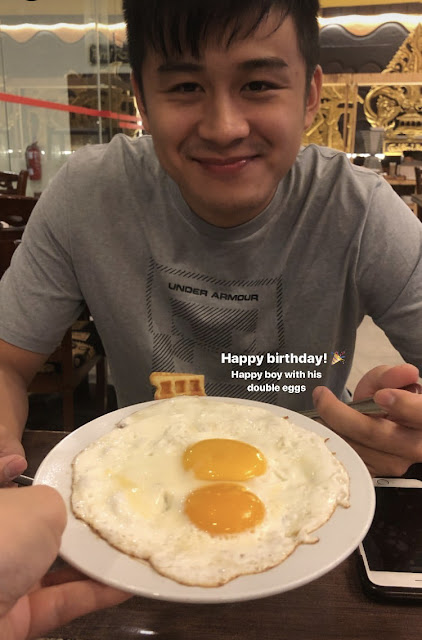 Birthday day with his new shirt I got him & his fave sunny side up double egg yolks
Happy Birthday J!

We then shopped around MegaMall, and bought a lot of Indonesian snacks & mi goreng (they have so many varieties compared to Brunei / SG!!). J also bought snacks for my family; thank you! I initially wanted to continue our annual tradition of baking J his birthday cake..but I've failed terribly this year. Supposed to bake a chocolate fudge cake for him, but it was quite bland, and the chocolate glazing wasn't melted properly as we didn't know how to use J's stove! The fruits that I bought to decorate the cake were also consumed, so everything was a disaster T_______T
Hence, I bought a kek lapis original flavour as my contingency plan. Kek lapis has no preservative & freshly made with good quality butter. I'm so happy that J loves it and finished the whole cake in the following days~ <3
We had a simple birthday dinner with his family :) Happy Birthday J, although some details did not go as I've hoped/planned, I'm glad that I was able to celebrate your birthday with you.

Last day in Singapore. J was on standby that day, but thankfully, he wasn't called in & we were able to spend some time together :) 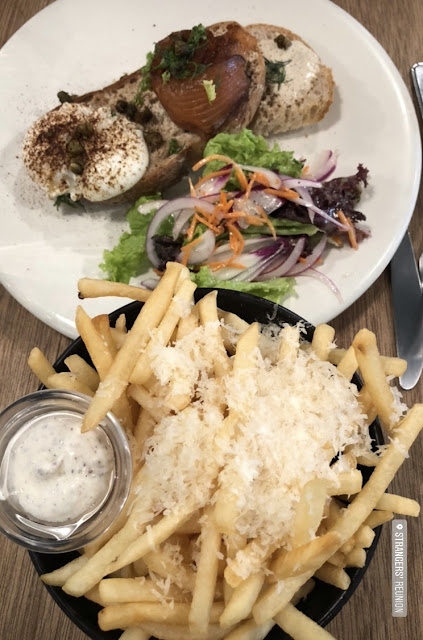 Celebrated advanced Valentine's date at Yardbird - according to Foodking NOC, they have the best fried chicken in Singapore. 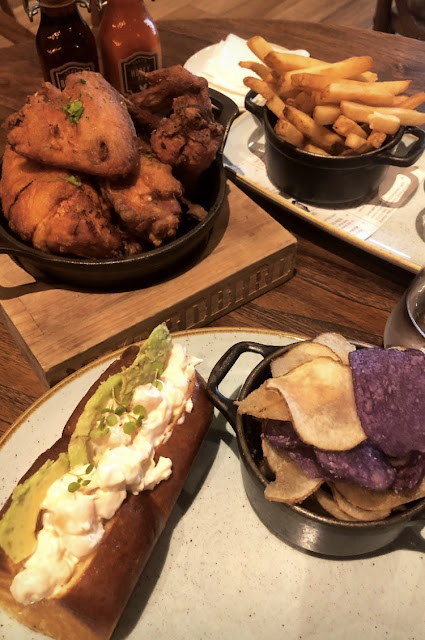 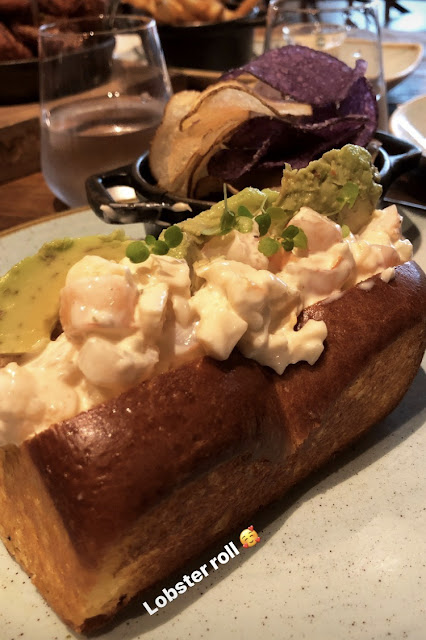 Also, finally visited Jewel & took pictures with the Vortex waterfall (it was under construction in January; and J said it was a sign for me to visit SG in Feb again & here I am~). Jewel is amazing, definitely deserves the title of the best & most beautiful airport in the world. 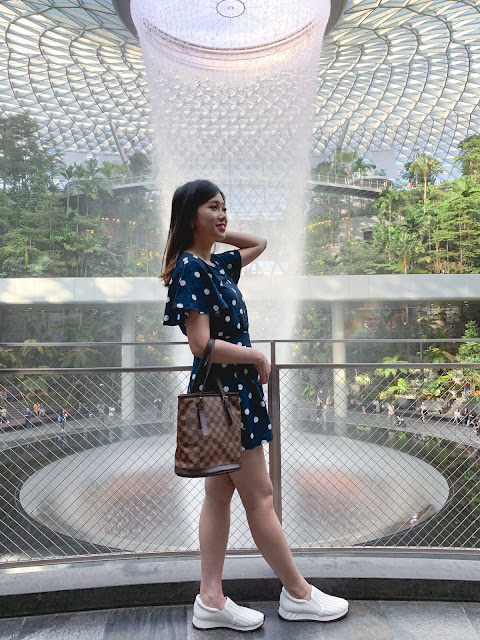 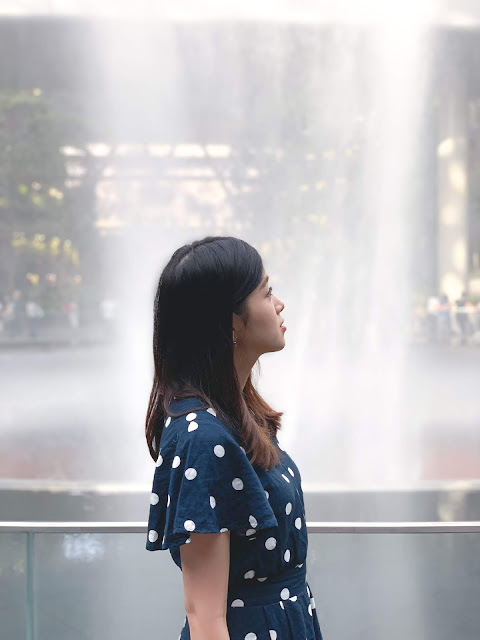 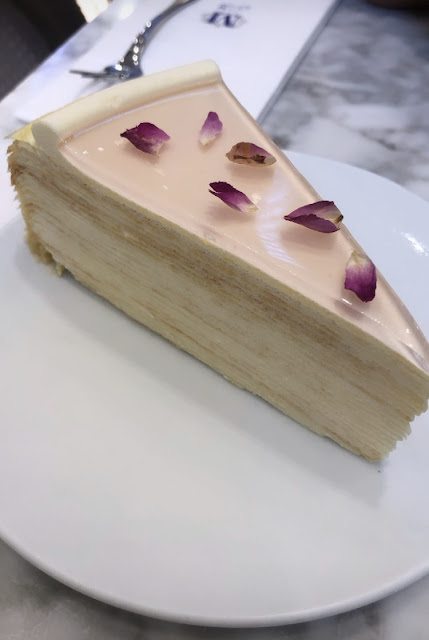 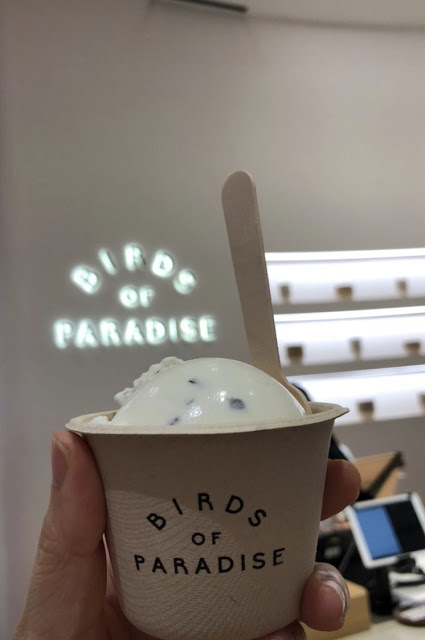 Birds of Paradise
They have a lot of interesting flavours; like lemon grass, spiced pear.. the one I chose was White Chrysanthemum single scoop (SGD $4.70)
Brings back those memories, where J always brings me for gelatos/ice cream. It became our thing, to take a picture of the ice cream & collage them heheh

I hate the feeling every single time we had to part in the airport. Nevertheless, thanks for the hospitality and patience every time I visited Singapore. This trip was also our last trip together. I'm thankful that I was able to celebrate J's birthday together for one last time as his significant other. I hoped that at least when he reminisced on his birthday experiences, I was there for 3 years of celebrations :)
Posted by Michelle at 10:19 AM