Finally, I have the time to do this review on DHC Eyelash Tonic!
I was introduced to it by my friend Kana when she came for an exchange program last July. I noticed that she has super long eyelashes and asked what's the brand of her mascara...
She told me her secret to it was DHC Eyelash Tonic..she has been using it everyday for about 2 months when I saw her with that super long lashes of hers *____*
After that, I tried looking for it in Hong Kong but to no avail...and then I found it in Taiwan! yay!

I bought it in Taiwan for about NTD 430 (if I've not mistaken), which is about BND $18.70?
Initially, I think it's slightly expensive for 6.5ml only...but it's actually quite reasonable as it has been almost 6 months and there's still about half of it (though I did not use it religiously for 2 times per day).. 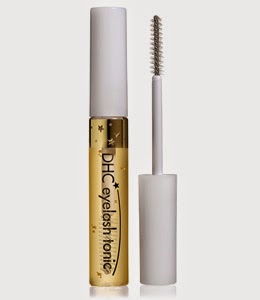 The After pics were taken 3 months after using DHC Eyelash Tonic; Pictures were taken on the same side of the eyes.
Pardon me for the horrendous dark circles and terrible skin condition.

Somehow, they looked shorter..but I could see that the volume increased? Yes? No? Am I hallucinating?

Not much difference as well..but I do notice that my lashes seem to be thicker and longer (especially the part nearer to my medial canthus)

Somehow it looks shorter here...but I felt that it's neater and it has more volume now (towards the lateral canthus)

Excuse me for my sleepy eyes T_T

It's easy to apply as the packaging is exactly like a mascara..but you have to apply it in care as the tonic stings the eyes. The tonic turns slightly cloudy after sometime, probably to my oily face (>_<) or the mascara wand caught some eye cream that I occasionally apply.

There's only a slight improvement for my eyelashes, as opposed to alot of other reviews and comments..I do notice that the eyelashes do not fall as often as before, but if I stopped using it for a few days, the effect seem to fade and my eyelashes would fall :(
It seems to work for a lot of people though..so you have to try it yourself! (:
Posted by Michelle at 1:36 AM 1 comment: